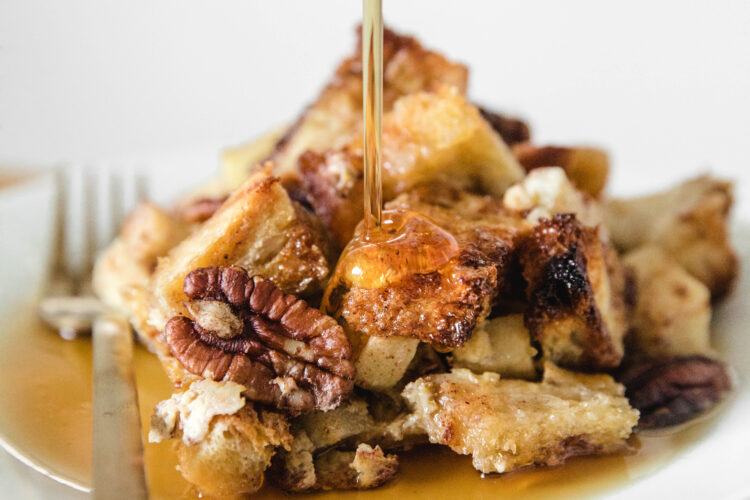 The fact that your house will smell of warm apples, cinnamon, pecans and maple syrup is just a really nice bonus. This apple cinnamon French toast bake is so good, I want it for breakfast, lunch, dinner and for dessert!

What is nice about this overnight French toast casserole is that you can prepare it the night before then bake and enjoy warm in the morning. This baked French toast for two is perfect for sharing for a  weekend breakfast if you ask me!

For this how to make easy oven baked French toast casserole recipe I used bread that was a few days old. It makes the bottom juicy layer and top crispy layer taste better. If you are in a hurry to make this apple cinnamon French toast bake, just leave the slices of bread out on the kitchen counter to dry for as long as you can.

And for apples, for this apple French toast I used granny Smith kind. They hold their shape well and give a nice tart contrast to the sweet rest of the dish. I tried to make this with Royal Gala kind and it turned out great too. So, feel free to experiment.

And to make this apple cinnamon pecan French toast bake extra Autumn appropriate I used pecans. They add nice crunch and smell lovely when warm. Even walnuts will work nice.

I made this how to make baked french toast with apples in a smaller pan so that bottom part stays juicy and top part crunchy. If you like everything to be juicy then spread this into a bigger pan so that everything can get covered with the egg and milk mixture.

This baked French toast with apples tastes great even cold!