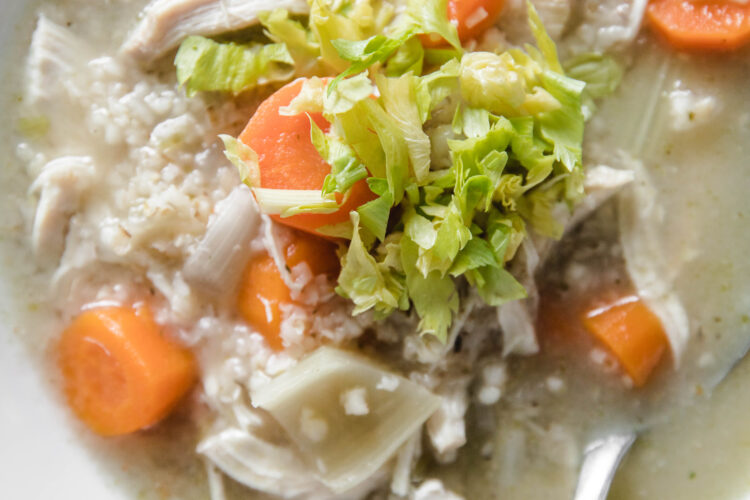 I was thinking of making alternative to chicken noodle soup – like a healthier version without the noodles. I still wanted soup to be filling. And then I saw all the pearled barley I had waiting to be used. So, I used it instead of noodles. I made the soup countless times since! This chicken barley soup is way better than the one with noodles. It tastes healthier and richer. And it’s more filling.

And since I used barley instead of noodles and water instead of oil this is also healthy chicken barley soup and a low-calorie chicken and barley soup. Barley is actually good and nutritious to consume if you are watching your calorie intake. It thickens the soup which is why it turns out more filling.

For veggies, for this healthy chicken and pearl barley soup I used lots or carrots and celery. You can also use broccoli if you like. And save the celery leaves to serve on top. They look pretty and add a nice fresh touch.

And if you are using pre made stock, like I did, this easy chicken and barley soup comes together in around 30 minutes. Which means, I make it a lot during weekdays.

And I make this healthy chicken soup with vegetables in big batch because it just tastes better next day or day after.

Lentil Soup With Curry And Kale

One Pot Vegetarian Soup With Cauliflower